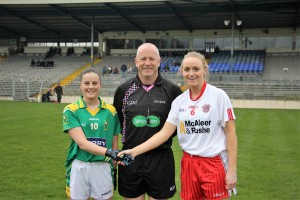 A Great performance at the Stadium by Kerry Ladies.
Kerry 7-22 Tyrone 0-8
Kerry Ladies last round game of the Lidl National Football League against Tyrone in Fitzgerald Stadium last Sunday proved to be a very one sided affair. A Kerry side, which showed 5 changes from the team that easily defeated Monaghan the weekend before, with starting debuts to Linda Bruggener in goals and Jane Lynch at left half back.

Kerry went into this game needing a win to ensure their part in gaining a slot in the League semi-final. They made no mistake in what was a comprehensive performance with all starting forwards scoring and the substitutes made their presence count, showing a healthy competition for places going forward.
It was Tyrone who opening the scoring with a pointed free from Emma Smyth. Kerry responded with a pointed free from boot of Sarah Houlihan. Tyrone quickly retook the lead with a point from Norleen Carland, This was to be the last time they had the lead with Kerry quickly responding with Lorraine Scanlon slotting over a free. For the next fifteen minutes Kerry upped the ante adding 2 goals and 7 points, effectively finishing the game as a contest. It was a Lorraine Scanlon point that gave Kerry the lead. With Kerry’s first goal coming in the 12th minute when Sarah Houlihan sent a ball in over the top of the Tyrone defence where Laura Rodgers collected and slotted the ball low and hard. Amanda Brosnan and Bernie Breen added points. Before Anna Galvin collected a pass and struck for goal number two. Kerry added five more points from play, before Tyrone registered their next score, a pointed free from full forward Niamh O’Neill. Kerry finished the half with a pointed free from Sarah Houlihan, a third goal from the same player. With Lorraine Scanlon rounding up a great half with another point, her sixth point of the day. Kerry headed in for the break with an impressive lead of 3-13 to 0-3.
Kerry made numerous changes at half time, but this didn’t seem to affect their momentum. They had 1-2 on the board in the opening few minutes, the goal coming from the boot of Amanda Brosnan. Tyrone did open their scoring of the half with a pointed free from Niamh O’Neill. Kerry responded with three more points and goal number five, this came from the boot of sub Megan O’Connell after a lovely move among the forwards. Tyrone’s Niamh O’Neill added another point to their tally. Kerry’s answer to this was another goal from sub Caoimhe O’Sullivan. 17 minutes in and Tyrone got another point from their main forward O’Neill. The only downside to the day for Kerry was the dismissal of Andrea Murphy in the 25th minute for what seemed to be a high tackle and this new ruling was voted in at congress a few weeks previous. Kerry however were still not finished and went on to add another four points with sub Caoimhe O’Sullivan adding a second gaol to her tally. Tyrone did add a further two points from Michaela McGuigan and Tori McLaughlin. So an outstanding victory for Kerry and an excellent overall team performance. Defence standing solid, the forwards all clicking add in Lorraine Scanlon contributing 6 points from midfield plus players coming off the bench all performing and fighting for places. Kerry must now play the waiting game and see the outcome of the postponed Armagh and Cork game to see if they can progress to a league semi-final. If semi-final slot is or isn’t achieved, Kerry ladies are looking forward to championship with what looks like a solid team and young talent emerging from the bench.