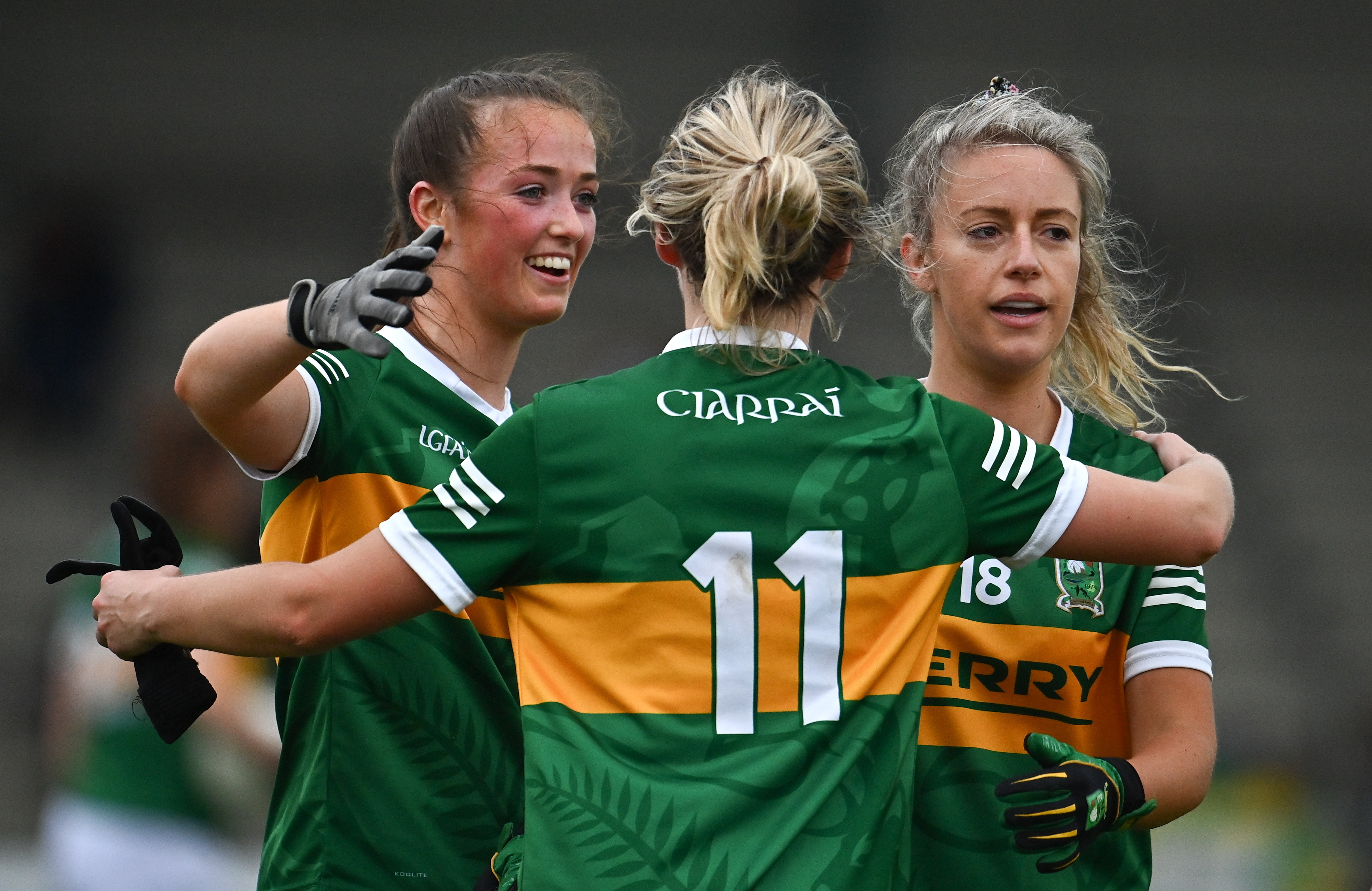 Kerry recorded an impressive win in the TG4 All Ireland Senior Championship Group C Round 1 clash against Galway. With the game played in St. Brendan’s Park Birr it was Galway who got off to the perfect start with a point from centre back Nicola Ward after an excellent run through the Kerry defence. Despite the presence of two Galway defenders & the goalkeeper Louise Ní Mhuircheartaigh had Kerry level with a well taken point following a long ball in by Anna Galvin. Aishling O’Connell had Kerry in front shortly after with a fisted point following good work by Paris McCarthy and Danielle O’Leary. Both sides exchanged points from Treacy Leonard and Louise Ní Mhuircheartaigh as Kerry remained in the lead mid-way through the half. Ciara Butler pulled off a great save shortly after from Lynsey Noone after a Galway attempt at a point came off the post. Galway responded again and were rewarded with a goal approaching the twentieth minute mark. Great teamwork by Olivia Divilly, Mairéad Seoighe & Andrea Trill saw Leanne Coen pam the ball into the back of the net to open up a two-point lead. The lead was extended to three with Treacy Leonard pointing. Kerry responded in the best possible fashion by working the ball upfield. Danielle O’Leary laid it off to Kayleigh Cronin, her long ball in found the on-rushing Lorraine Scanlon who expertly dispatched to the back of the net to draw the sides level. Galway would fail to score for the remainder of half as three frees from Louise Ní Mhuircheartaigh saw Kerry go in at the break three points in front on a score line Kerry 1-06 Galway 1-03.

Kerry got off to the perfect start with a point from Cáit Lynch at the beginning of the second half with a well taken score. Galway were now behind by four and knew they would have to make an immediate impact for fear the game would slip away from them. Three substitutions and three points from play by Treacy Leonard saw the gap now reduced to one point. Kerry responded brilliantly. A superb run by Niamh Carmody and patient play by Erica McGlynn & Danielle O’Leary saw Louise point for Kerry. Kerry raised their second green flag of the game shortly after. A Louise Ní Mhuircheartaigh free dropped short with Paris McCarthy on hand to fist into the net as Kerry were now five points in front with ten minutes gone and very much in control. Things got even better mid-way through the half. With Eilís Lynch winning the ball in defence Kerry worked the ball up field with Erica McGlynn who was showing well for ball throughout the game finding Niamh Carmody who’s shot riffled to the back of the net giving Galway keeper Alanah Griffin no chance. The Kingdom were now eight points in front and that lead was nine with ten minutes remaining. Credit to Galway they never gave up. Treacy Leonard scored her sixth point of the game as Galway substitute Ailish Morrissey had her goal disallowed. Kerry had the lead back out to nine with over five minutes remaining. What followed was a frantic finish. Kerry’s Lorraine Scanlon and Louise Ní Mhuircheartaigh both receiving yellow cards resulting in them seeing out the remainder of the game with thirteen players. Goals from Galway’s Louise Ward and Leanne Coen and a free from Olivia Divilly saw the lead reduced to two ensuring a nervous finish but it wasn’t to be as Kerry ran out deserving winners. Kerry’s next game in the championship is Saturday 25th June at home to Westmeath. A win here would see Kerry top the group. Time and venue TBC