Cork 2-8 Kerry 0-7
Kerry faced the old rivals in the 2015 Munster MLGA Senior championship final in the Killarney Legion GAA grounds last evening. In a fantastic facility and hosted to perfection by the Club, full credit to all in Legion LGFA and GAA clubs.. 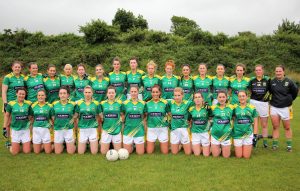 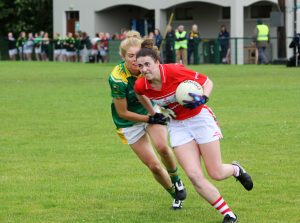 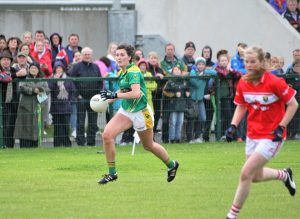 Kerry were reigning Munster champions and Cork didn’t just come and show up for this game and as the saying “Once bitten Twice shy” comes to mind, Cork had a lot to prove and they did.
From the start, Cork began with a sweeper system enabling Cork to halt a lot of ball been worked forward by Kerry to their full forward line. Bernie Breen had the first score on the board and Cork replied with three points, two frees from Orla Finn and a point from Breige Corkery in the opening quarter. Kerry going forward found the going tough to break down the Rebels defensive wall and with passes going astray or dropping short, they couldn’t capitalise from their forward runs. Both sides then traded scores and the home side had 2 efforts raising the white flag from Lorraine Scanlon and Louise Ni Mhuircheartaigh and Lorraine Scanlon as the sides drew level with 6 remaining in the first half. Orlagh Farmer then put the visitors ahead by one and in the 27th minute from an error in the home side’s defence, Cork raised the green flag as Orla Finn went one on one with Kerry keeper Edel Murphy, the visitors now ahead by 4 as they entered injury time and Kerry had 3 efforts sail wide which would have reduced the margin, but the visitors held out to hold a lead of 4 at the short whistle.
Kerry 0-4 Cork 1-5.

At the restart Kerry introduced Anna Galvin and Emma Sherwood and this hopefully would have given the home side the start that was needed for a comeback, but Cork responded first as they moved 6 ahead in the opening minutes of the second half with two more from Orla Finn, before the end of the third quarter and disaster struck as Ciara O’Sullivan was deemed have been fouled inside the 13 meter line and Rena Buckley gave the Kerry goalie no chance.
Kerry were now facing an uphill battle and to steady the ship introduced Megan O’Connell, Kate O’Sullivan, and Andrea Murphy. Kerry had 3 from play in the closing minutes as Emma Sherwood, Sarah Houlihan & Lorraine Scanlon pointed, leaving 7 between the sides and Cork ran out the clock on a scoreline of 2-8 to 0-7.