Despite the best efforts of storm Ciara Kerry made it 3 wins out of 3 with a hard-fought win against a spirited Armagh side on Sunday. The game was put back to 1:00pm to allow for the worst of the storm to pass and for the safety of supporters, players and management. Armagh made two changes prior to throw in. Kerry lined out as selected. Kerry got off to the best possible start playing with the breeze, scoring 1-04 without reply. Louise Ní Mhuireachtaigh goal in the fourth minute getting Kerry off to the best possible start after Emma Dineen sent a long ball in. Armagh has a chance to score prior to this but Blaithin Mackin’s shot hit the crossbar. Further points from Hannah O’Donoghue (2) and Emma Dineen followed before Armagh midfielder Caroline O’Hanlon opened the visitors account from a free in the twelfth minute after the referee had awarded advantage. This was swiftly followed by Kelly Mallon to reduce the deficit to five. With conditions worsening in the half Kerry went on a further scoring spree with four different players all getting on the scoresheet. All scores coming from play. Emma Dineen with her second of the afternoon to increase Kerry’s lead to nine points by the tweneth minute mark. Two points from Caroline O’Halloran & one from Kelly Mallon keeping the visitors within distance as the game approached halftime. Kerry were forced into two substitutions late in the half, Fiadhna Tangney & Hannah O’Donoghue being replaced by Andrea Murphy & Miriam O’Keeffe. Kerry wing back Aishling O’Connell with the final point of the half to leave the sides going in at the break Kerry 1-09 Armagh 0-05.

Armagh would have the wind advantage in the second half and changed into their away strip during the halftime break as well, but it was Kerry who got off to the best possible star. Niamh Ní­ Chonchúir upon resumption had Kerry’s lead back out to ten points. The goal stood despite the referee playing advantage. The home side forced into another substitution at halftime, Laoise Caughlan being replaced by Eilí­s Lynch. The goal for the home side was to prove vital at the end of the game. Both sides exchanged two points each Caroline O’Hanlon (frees) for the visitors, Louise NÃ­ Mhuireachtaigh and & Eilish O’Leary with her first of the afternoon to keep Kerry’s lead at ten points. The Orchard county kept the score board ticking over with about 10 minutes remaining had the deficit down to eight. Substitute in the first half Andrea Murphy would score Kerry’s final point of the afternoon as Armagh would outscore the host 2-01 for the remainder of the match to set up a frantic finish but one Kerry would prevail in. Despite the best efforts of Aishling O’Connell Blaithin Mackin scored the visitors first gaol which was soon followed by Aoife McCoy. It was to prove too little too late as the hosts held on for a much-deserved win. Some frantic defending and interceptions by backs, forwards & substitutions made sure the kingdom got their first win on home soil heading into the back to back home fixtures against Tyrone & Monaghan.

N Carmody for E Dineen, D O’Leary for E O’Leary (both second half)

Subs: (all second half)

All photos by Julia Deady 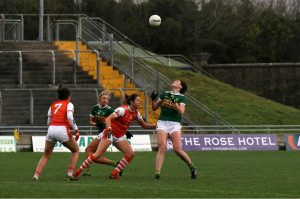 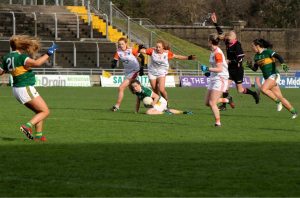 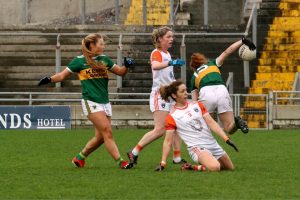 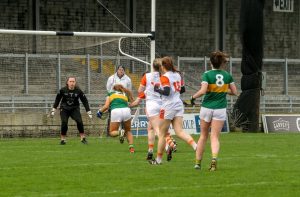 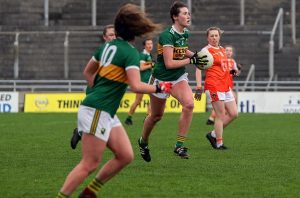